It’s been interesting to watch Kizer’s evolution over the years. They had an ambitious, albeit amorphous, beginning, with somewhat forgettable designs rendered in high-quality materials at head-turning prices; I still get a little jolt when I see the Sliver going for $70 with S35VN steel.

Buy the Kizer Guru at BladeHQ

Then Kizer knives had the brilliant idea of bringing in talented knife designers to take full advantage of their manufacturing capabilities and great prices. It wasn’t their first collaboration knife, but the Ray Laconico-designed Gemini was the a big hit for Kizer, and the amount of collaborations rolling out of their doors hasn’t slowed down since. The company realizes a stunning amount of models, from makers at all stages of their career: well-known names like Ray Laconico and Matt Diskin appear alongside promising up and comers like Justin Lundquist and Elija Isham.

Matt Degnan is a maker whose work has been brought to wider recognition with several Kizer collabs. Degnan is behind the Roach, the Kane, and most recently the Guru. The first two models didn’t move the needle, but the Guru seemed much more my speed.

As with their competitor Zero Tolerance, I haven’t really found “my Kizer” yet. I reviewed the 3404, which was just fine but ultimately forgettable. I had some enthusiasm for the Vanguard Gemini but that has waned some since my review (which in itself wasn’t unqualified in its praise). The Guru stood out in Kizer’s recent offerings as a model that might just be able to go the distance. Let’s take a closer look.

Full Disclosure: Kizer provided me with a Guru free of charge for the purposes of the review. This in no way affected my reviewing process nor did it alter my opinions or verdict.

The Guru has a “Sheepsfoot Looking Up” kind of blade shape that is attractive and unusual. Functionally, it is all gently-curved belly, and that’s fine. With a whopping .14” thick blade stock and a relatively short sabre grind the Guru isn’t much of a slicer. It’s thicker behind the edge than my Strider PT. But while it isn’t my thing, a hard use grind isn’t immediately grounds for failure. The problem is, the Guru might be less “ground for durability” and more just “poorly ground,” with confusing peaks and valleys in wildly different types of cutting tasks.

I don’t usually cut food with my knives, but I did a little food prep with the Guru and can confirm you’re going to leave behind a David Cronenberg-esque crime scene cutting fruit and other foodstuffs with this thing – it ain’t pretty. In cardboard and wood it can function decently, but only if you “aim” the edge at a specific angle; otherwise it bunches up. Strangely, the one area in which the Guru performs well is wharncliffe/sheepsfoot-style tasks, where the point is in play more than the full edge: cutting tape when opening a box, for instance; surprisingly delicate tasks for such a burly blade to excel in.

S35VN is becoming so prevalent in high-end knives that we reviewers are quickly approaching 8Cr13MoV levels of redundancy when it comes to writing about it. It’s great, Kizer’s iteration is great, you’ll love it. Editor’s note: And as always you can find a deeper dive into knife steel here.

One thing to note: this is the third Kizer I’ve had (the second with S35VN) and while overall fit and finish is great, they don’t get their knives real sharp before boxing them up. In the case of knives with super steels I think it’s fair for the user to expect a good edge out of the box: not everyone has the means or the knowledge to immediately sharpen these more difficult-to-work-with steels. This will be an even bigger problem as they transition into less amenable high-end steels like M390.

The Guru’s handle is so close to being great. A forward finger choil is almost always a guarantor of decent if not mind-blowing ergos, but here it’s more of a stumbling block. Kizer chose to begin the blade right at the end of the choil, with nothing between the end of the choil and the beginning of the sharpened edge. This is a common choice among manufacturers and not peculiar to Kizer, but it does mean you need to be careful when you’re choking up on the Guru: it would be very easy for your finger to slide forward onto the edge.

Back off the choil and the Guru accommodates three fingers in the middle portion of the handle and one on the other side of the beak. This isn’t always a successful setup but here, mainly because the post-beak butt end of the knife is large and flat, it works okay. The problem is, when you’re not using the forward choil you’re more than an inch away from the start of the cutting edge – not really acceptable for a knife of this size, and it squanders the fine control that makes a sheepsfoot blade shine in use.

There may be issues with the ergonomics but the Guru’s pocket clip is great. This is the way a sculpted clip should work. It’s durable, secure, with plenty of spring tension, and looks really nice. The rounded edges eliminate hotspots and even though the Guru is kind of portly it keeps it in place in your pocket. Other than the non-reversability I have no complaints. This is such an improvement over the nightmare clips on early Kizer models.

In my review of the Spyderco Mantra 1 I noted that the ball bearing pivot seemed to work better with the thumb hole than the flipper, and while I’ll never opt for ball bearings over standard washers I have been curious to further explore how they played with non-flipper deployment methods.

My Guru is the thumb stud variant and the ball bearing deployment is very good. Once the thick blade gets over the stiff detent it flies open. Kizer deserves particular praise for that detent. I’ve handled many Kizers and none of them had those detent issues that we see on other frame locks. You can put all the pressure you want on the Guru’s lock bar and it will still deploy reliably.

Lockup is similarly well-done. The stainless steel insert makes contact against about 30% of the tang. There is no blade play, and disengagement is stick-free and smooth. The only issue I have is that, in closing, the blade wants to fall shut quite quickly – a little dangerous in my opinion. The detent is so aggressive that it functions as a kind of half-stop, catching the knife again as you’re closing it, so that helps a little bit, but it’s still something to be aware of.

The Guru is well-made as all Kizers are, but I would have liked to see more time spent honing this one for great performance in addition to its mechanical competence. It looks cool, and there’s nothing wrong with picking up a sub-optimal knife because you like the way it looks, but for me, the wedgey edge and incorrect finger choil are a fatal combination and overwhelm any other charms this design has.

Kizer reset the bar for what we could expect for our dollar, but now that the rest of the industry has caught up their designs have to pull their weight in an increasingly crowded market segment, and I can’t think of any objective reason to recommend the Guru. It doesn’t quite manage to bridge the gap between “interesting design” and “great tool.” 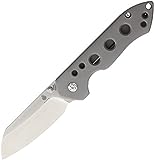 If you are thinking of buying a Kizer Guru, please consider purchasing it at Amazon or BladeHQ. By purchasing things through any of the links on this website you support BladeReviews.com, keep the website free of annoying banner ads, and help produce future reviews. Thank you very much.